Teams are usually in some form of development or other.

Even when you could be tempted to think that the current situation is stabilizing, or particularly then, things are always changing around or in the team that affect the team members and the team dynamic, be it through changes in team constellation, leadership changes, new input, new constraints, new frameworks, new customer requirements… you name it, and it can influence your team. 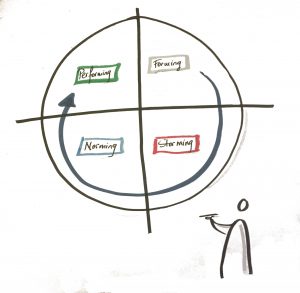 One simple system I find useful to bring into team diagnoses to help provide some kinds of structure is the good old model by Bruce Tuckmann (Tuckmann, 1965), the team phases, as a basis for looking at what they mean for the specific teams I am working with and what they need from their colleagues, leadership, customers, suppliers, etc…

You can easily apply this system with its four stages to you team to get insights on where you are standing.

The four phases included in the model are: forming, storming, norming, performing. As well as the fifth phase, added by Tuckmann and Jensen more than ten years later: adjourning, which applies when the team is broken up and re-organised after finishing a task.

What exactly do the four phases mean for your team and what it needs from its leadership?

In forming, the team is in its initial phase, and being confronted with its task for the first time. This phase is usually characterized by a lack of formal structure, novelty, and plenty of experimentation, learning and getting to know each other. It can also lead to some insecurities, mostly due to the lack of clarity on the way forward, and requires leadership to give some level of orientation in terms of why the team is here and what their task is exactly.

One of the main tasks of leadership in forming is to ensure that there is a good level of contact and communication between team members, so that they can familiarize themselves with each other, as well as their goals.

A further key task is to be patient, and not to attempt to skip this stage, driven by what is in most cases understandable, but not helpful, eagerness to ‘really get going’.

Having established first connections and alliances, the storming phase is the order of the day. With team members getting into the details of working together, conflicts become more common, with some centering topics such as potentially overlapping working areas, customer-supplier relationships within the team, power struggles and opposing opinions, just to name some examples.

Many of these conflicts serve to clarify ways of working and communicating within the team and are highly valuable. Therefore it is key that leadership doesn’t attempt to stymie them and instead expects and manages conflict in a way that allows the team to openly deal with the topics at hand and benefit from the outcome.  Habing established an open feedback culture is of great value here.

Having made it through the ups and downs of forming and storming, the team is ready to really get into how they want to work with each other, grow more closely together, and firm up their organization. This is when the identity and cohesion of the team are strengthened. Open, honest exchanges on tasks and cooperation are good indicators of being in this phase.

As a leader, your task lies in ensuring the goals, tasks and task structure remain clear to everyone, a communication framework is in place and open communication is established within the team. Team rituals can really help supporting team development in this phase and onward.

Finally, the phase that mostly we all want to be in all the time, when the team is in flow and working efficiently and effectively, steaming ahead towards the goals previously agreed.

This is when it is time to take the hands off as much as possible in leadership, potentially the hardest phase of all for leaders, who like to be in the middle of things. If things have gone well, your tasks will center mostly on ensuring that the team can work and continue working, and that all the pre-requisites for that are given. Trust your team, and let go as much as you can. Keep an eye on the situation and ensure they have what they need.

One may think that these phases always follow on each other, and, in an ideal case, they do.

However, whenever something changes within the team, teams tend to ‘fall back’ to the previous phase, or possibly further, usually to either forming or storming, requiring attention and clarification appropriate to these phases.

Changes in the team make-up, the organization or the leadership, for example, can lead to this ‘back and forth’ between team phases. What teams don’t tend to do is ‘fall forward’, allowing for skipping of phases. This tends to lead to phenomena from earlier phases sticking with the team and affecting the team performance in the long run.

I hope this has given you an insight into where you team stands and some pointers as to where and when they need, or in fact don’t need your support. If you need any further support in terms of developing your team and your leadership in business coaching or business training, please get in touch. Looking forward to hearing from you. 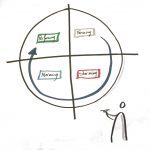 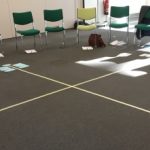 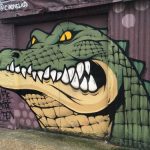 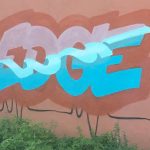 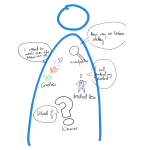 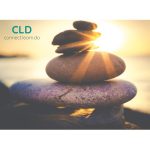 We're not around right now. But you can send us an email and we'll get back to you asap.